Andy Doig was interviewed for the first edition of Fabricate magazine earlier this year, his left hand even made it to the cover! 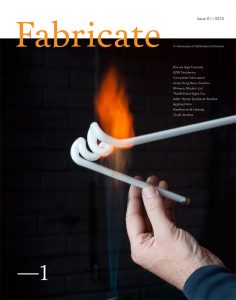 What are you currently working on?
A sketch of a skull came in yesterday from a design company from Southsea who are moving their offices to Brighton. They’re going to do a show in an art gallery and they want to say ‘look Brighton, we’re here!’ so they brought in a drawing they’ve done and I’m bringing a little bit of life into it.

How did you get to where you are now?
You get driven at a certain point in life to do something, and you know it’s right— it’s the right time and everything slots together. In the 1980s and the early 1990s, neon was just massive. In the theatre, film and TV world, they all had it so there was just tons and tons and tons of work. We learned the ropes in London doing theatre work, then sold one sign, sold another, sold another.

What sort of clients approach you?
People love our work so they come in and want their own version; either lyrics of a song or poetry from when they first met as a couple if it’s a wedding anniversary. We also have ad agencies, designers and students come to us. 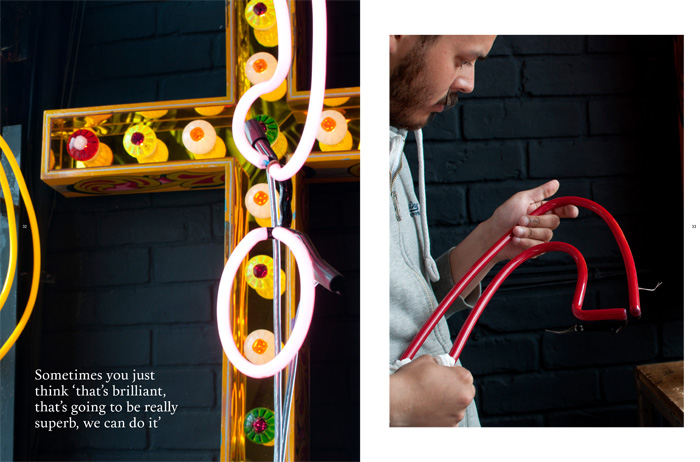 What’s the most obscure commission request that you’ve had?
There’s a design company made up of design students who are ‘inventors’, so they come up with these crazy ideas for interactive stuff. They came to us because they’d invented a blowing machine that puts out a puff of air and objects float in it. You could pick them up and put them back and they’d continue to float. They wanted objects which would glow, so they asked me to make glass spheres filled with neon gas. That was pretty wild and that excited me. I’d blown spheres before and filled them with gas, so I already knew that it could work.

You’ve got to have mutual trust

Do you have a time-frame for producing commissioned work?
Turnaround is about three weeks. When I listen to a pitch over the phone about a new idea, that’s the moment we start thinking about how much time is involved. Those three weeks give us time to think about things and how those things can be built.

At the moment, you have Amalie and Danny in your team. Did you train Danny?
Amalie, my wife, is a creative influence. Danny is a design student from the university. What I hope Danny goes away with is quick problem solving. It’s that kind of logic we teach; how to construct stuff quickly and efficiently. We do take students in and teach them an overview. It’s a side line of how you put a neon sign together. We are currently running weekend courses in glass blowing for people who want to feel what its like to make a piece of neon for themselves.

What are you working on at the moment?
We’ve just done two signs for a friend who has a pub chain and a neon woman for a piece of artwork that a couple from Nottingham commissioned us to make. I’m making a white neon bird to bring to Amsterdam just in time for Queen’s Day, where everyone takes their stuff out onto the street and sells it for just one day. Then we’re going to Ibiza the day we get back. We have some giant neon curves that we’re putting around palm trees outside a hotel, which we do every year.

Do you do your own work alongside commissions?
Up until two years ago, I was almost continually just doing work for Dior, Burberry and other companies. I’ve just spent three months just making my own neon art and I have got a load of commissions, so it’s a mixed bag. 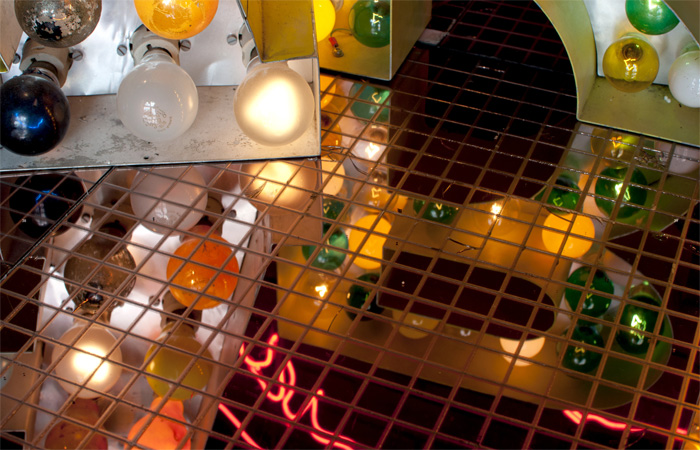